So, I know what you are all thinking.  What happened after the stubbed toe and such?  It was actually some very prayerful things, mostly.  Jen went to the Blessed Sacrament Chapel while I played some guitar on the porch.  As I was starting to play, someone came out and asked if I minded that he sit there and read.  I said as long as you don’t mind me singing a little off-key.  It was good and calming to play and he did not mind.

The next adventure involved going on our rosary walk.  It was wonderful as usual.  We did the Hail Mary’s in Italian as usual and attempted the Glory Be’s.  I think we are still missing some parts, but it sounds decent enough and  God would understand.  When we finished, Jen thought it a good idea to pray the Chaplet of Divine Mercy.  I agreed and thus we did so.  It was very good.

What was very kind was the offer to go with the group that came from Philly to have some ice cream out with them.  We declined, but it was a very gracious offer.  I think it was the guy that brought the group last year.  Maybe he is the one who brings them every year.

So Jen and I learned something.  Our Ipods have bluetooth.  This means we can play scrabble against each other on our own Ipods.  Wonderful!  Thus we played some games before crashing to bed.  She won…of course.

This morning, we were up early as usual.  There is no surprise there.  Mass was at 8:30 for anyone who wanted to come and participate.  Beforehand Jen and I prayed the office in the Bl. Sac. Chapel.  I was asked to read for mass, aside from page turning and singing, which involved some words I am not quite sure I said right.  Either way, it was good.  I did get a little page turning happy on one song.  It was funny. 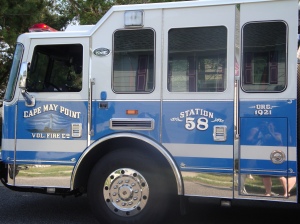 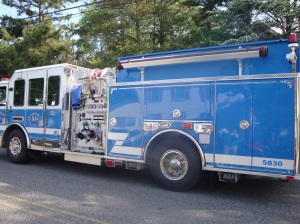 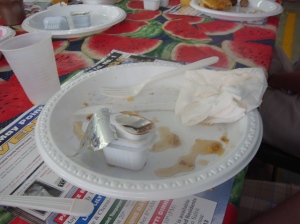 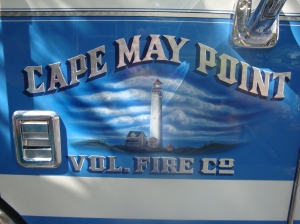 What can I say?  I love the blue fire engine trucks.  Who wouldn’t?  I may have said before, but I am not sure.  Brother Al is the mastermind behind these.  Back when he was the Fire Chief, this was a choice he made.  I am certainly a fan.  Thus we took a picture next to one and of them.

This morning was the pancake breakfast at the firehouse.  As you can see, we ate the food faster than the thought to take a creative picture of it.  It was very good.

When we got back from that delicious food, we played some cards outside again.  This is on the wall of the side of the building.  It is the Marianist symbol that you commonly see.

This would be me laying down on my bed while we were playing scrabble with each other on our own Ipods again.  Jen won, as usual.

Being that we are eating oddly this weekend on retreat, we were all of a sudden a little more hungry.  That being how it was, we went down and found some apples.  Yum! 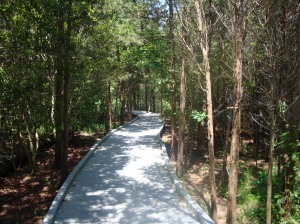 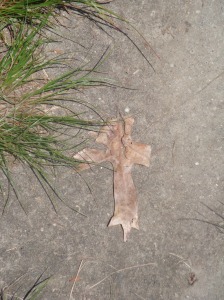 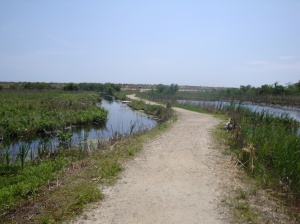 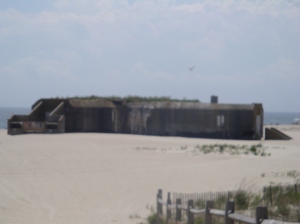 With the apples nearly gone, Jen and I headed out towards Cape May Point State Park.  We walk the 1.3 mile loop that could pop you out the beach if you wanted it to.  The part of the beach that we came out on was where the bunker was.  From there, we walked down the shore to the entrance/exit we use at Mary’s House.  It as a good long walk down in flip-flops then barefoot.  We got a little red in the face.  No mom, I did not use sunscreen.  We kind of forgot that one.  Don’t worry, it is not that bad this time, only some red in the face.

Haha.  Is it possible to avoid work?  Earlier in the morning, pretty much right after mass or right after eating, Fooch had me on the second floor porch hanging the flags for Memorial Day Weekend.  When we got back from our hike/walk, we were put to work cutting things out for the summer retreat.  It was not hard.  It just made me laugh!  I had offered myself for work.

We like to play games.  We play some more cards and more scrabble.  It is great.  Not to mention, all day eating chocolate and sweets.  That is bad for the mouth, I brushed my teeth an extra time.

After that, Jen went to have some Jesus time and I hung out with my Marianist family.  It was a good time.  Dinner approached and it was the usual barbecue and drinks.  Delicious!  Guess what?  Jen and I signed up for helping to clean up.  Guess what we signed up for?  POTS!  😀  I know some people who are laughing.

After dinner, Jen went to finish some Jesus time and I played a game of cribbage with Brother Tom.  It was wonderful, even though he did surely beat me.  Jen came in around the time that we ended.  The three of us talked for a little while and then parted our ways.

Evening prayer was in the Bl. Sac. Chapel.  It was nice.  We sang the opening Hymn and the Magnificat by Lori True (has latin as the refrain).  🙂  It was good.

Now, you will find me sitting here posting.  We are planning to go for another rosary walk tonight as soon as I am done.  Thank you God for this wonderful time at the point.  Thank you for allowing me to spend it with Jen.  Peace to you all!